Skip to content
HomeCD Review: “Battle Cry” by The Kingsmen

I’ve been wanting to review this one for a while but haven’t had the time, so I hope you all will forgive me for showing up late to the party. But with my semester being over and having a full week break, I now have time to blog a little bit. The subject of today’s CD Review is one that’s been getting a lot of great buzz, Battle Cry by The Kingsmen. 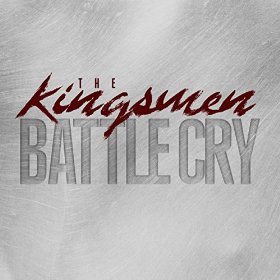 Battle Cry marks the first mainline project by the group to feature both Chris Jenkins (tenor) and Bob Sellers (lead), although the lineup has been together since 2012, along with baritone Randy Crawford and longtime bass vocalist and Hall of Famer, Ray Dean Reese. The project kicks off with the title track, Battle Cry, that features Crawford. The song opens a cappella before the music kicks in. I’ve Never Seen The Righteous Forsaken is the first song to feature Jenkins, and he tears up this Rebecca Peck tune. Jenkins is one of the finest tenor singers to come along in the industry in recent years and on a personal note, I believe he’s the finest Kingsmen tenor since Jeremy Peace. He Took Away My Burden is the third cut, and a great quartet song that features Sellers & Jenkins on step out lines on the chorus. The song also gives Ray his first feature on the second verse.

Next up is the projects first single, Oh Yes I Am, which features Jenkins. He absolutely tears up this song, its classic Kingsmen all the way and exactly what you expect for these guys. It’s been a favorite among fans as well, as it topped the Singing News Radio charts. Cross Of Grace is a ballad that closes out the first half of the project, and gives Sellers his first feature. Beautiful City kicks off the second half of the cd, and is a great fast quartet song that features Ray on the second verse. I Know is vintage Kingsmen; written by the great Ila Knight.  Ray sings the first verse and Sellers sings the second. The guys do a key change on the chorus and Jenkins takes over and takes it home. This is a song I can imagine the 70’s era group singing, I can almost hear Squire or Hamill singing the second verse of this song.

It Should Have Rained is another ballad, this time giving Crawford his first feature. It starts out with just piano on the first verse and chorus, with band and orchestration kicking in on the second verse. Faith continues the slower pace, with Sellers on the verses and Jenkins taking over on the chorus. Picking up the pace is Come and Dine  a new song written by Dianne Wilkinson. Its a hand clapping, foot stomping tune that get up and goes. The project comes to a close with a song written by Crawford that feature him as well, Here I Stand Amazed.

Whenever a project receives a lot of hype, its natural to assume it will not be as good as advertised. But Battle Cry is the exception, this cd is the best project the Kingsmen have recorded in the last 20 years. I will even say its the best Kingsmen recording since Singing In The Sun in 1992. Their blend is the best it has been in years; Jenkins, Sellers, and Crawford along with Reese give the group a sound that is true to the Kingsmen’s legacy but also completely all their own. The song selection, lyrical content, and vocal performances were the best I have heard in a Kingsmen project in years. Battle Cry, hands down, was the best quartet project released in 2014, hands. If you don’t have it, you better get it!

3 thoughts on “CD Review: “Battle Cry” by The Kingsmen”

Album Review An Artist You Should Know Behind The Music Classic Album Review Commentary Flashback Friday It's Just My Opinion My Favorite Albums My Top 10 Greatest Quartets New Releases News Sing It Again! Song Of The Week The Cathedrals The People's Choice The Underrateds Uncategorized Video Of The Week What's New On The Table? YouTube Find